Should your business catch Pokémon?

I had never played any version of Pokémon until the buzz about Pokémon Go became unavoidable and piqued my curiosity. Thankfully, my good friend was able to teach me how to “catch them all” and helped me successfully join Team Mystic. (It was a big deal.)

After several lessons on becoming a Pokémon master I now have an understanding of how the game works.  Users download the game to their smartphone and the application uses the player’s location to create an augmented reality. As the player navigates their surroundings, an avatar follows along on the map. The map shows where to find Pokéstops and Gyms. These are places to collect supplies and battle other teams, respectively. Along the way users will encounter Pokémon to catch. Lures can be placed at Pokéstops to attract Pokémon. Sometimes it’s just easier for them to come to you. This is probably the most alluring part of Pokémon Go and where businesses can get in on the game.

Lures attract Pokémon to the Pokéstops for half an hour at a time. A lure is an in-app purchase. One lure costs 100 Pokécoins or $0.99. On the other end of the spectrum, $100 can get you 14,500 Pokécoins. An eight-pack of lures costs 680 Pokécoins. The math works out to about $1.19 per hour for businesses thinking about using lures to attract customers. A few businesses have used this lure model successfully. 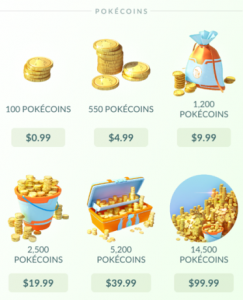 L’inizio Pizza Bar used the lure model, along with some Pokémon themed pizza, to bring in more customers and saw a 30 percent increase in food and drink sales.

It’s A Grind Coffee House in California used lures as an incentive for customers to purchase drinks. For every 15 drinks sold, the coffee shop would place a lure.

The lure model isn’t the only way for businesses to benefit from Pokémon Go.  Some businesses have tried creative approaches, such as offering discounts for members of a specific team. A bar in Grand Rapids offered a discount to members of Team Mystic. Other ideas for using Pokémon Go for business include rewarding players for their progress in the game or engaging with players on social media.  As a business, it’s important to catch them all. Customers, that is.