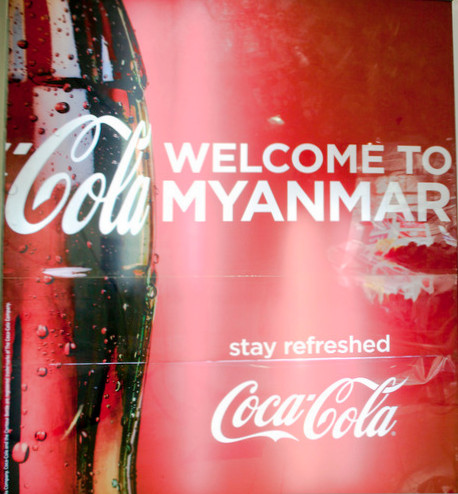 If you’d like to sell the world a whatever, take a tip from Coke: The fundamental things apply, across time and distance.

The beverage brand is reintroducing itself in Myanmar, an Asian country formerly named Burma, where a six-decade import ban ended last year. That marketing hurdle turns out to be higher than for a new product, NPR correspondent Robert Smith explains in a recent report.

“The imagery they had of Coke was that it was for the extremely rich and well-to-do people,” says Shakir Moin, Coke’s marketing director for Southeast Asia.

He cleared that challenge and raised brand visibility by going back to basics — a case study in Advertising 101. Here part of Smith’s blog post about his story:

“Moin says he started to go back in the Coca-Cola archives. He was looking at how the company marketed its product before the Internet, before TV, even before radio. Eventually he found his perfect model for Myanmar, a place where nobody knew anything about Coke:  Atlanta, 1886.

Back then, the hot advertising trend was wall posters. Moin noticed that in the beginning, Coke didn’t use the posters to talk about friends or happiness or style. It talked about what the product tasted like. It simply described it. Moin pulled out two words in particular that would form the core of his Myanmar campaign — “delicious, refreshing.”

Those two words from the 1800s are now on the Myanmar bottle, and on the billboards and fliers that advertise the product.

The marketers in Myanmar also use another basic edge that Coke has over local rivals – authenticity.

“The Real Thing” – a slogan without borders.

The takeaway from this new launch of an old brand: Tradition can trump technology, genuine is valued over gimmicks.

So consider a familiar pitch with proven power. It can be delicious, refreshing.